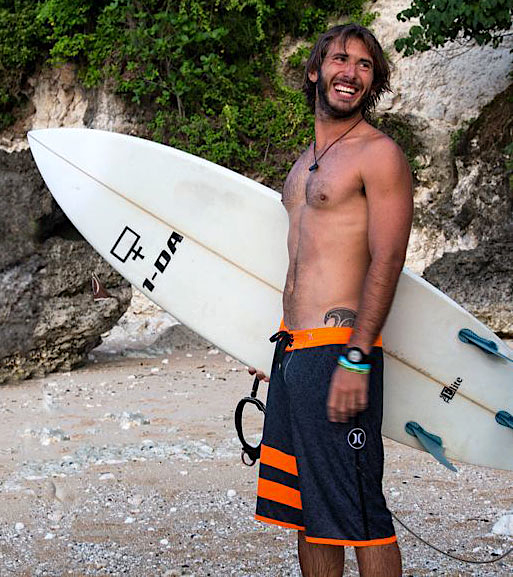 “They Call me Grillo. As a kid, I’ve always been told that one day I would be a lawyer”.

I had a pleasant adolescence and actually ended up getting a degree in Law. But I’ve always felt a lack OF “Something”. Something motivating, something really worth living for.

During the fourth year of University, by chance, I ended up travelling to the Canary Islands through the Erasmus exchange program. I was chasing a dream I had as a child but thought was impossible: learn how to surf, as I had seen on television in the movie “North Shore” on a Sunday afternoon at my grandparents’ place.

It’s been the beginning of everything: not only have I found that “Something”, but I also discovered my passion for traveling. Once I got back home, during winter, I put the same energy and constancy that I learned from surfing into snowboarding. When summer came around, I learned kitesurfing while writing my graduate thesis.

Once I graduated, I left for Australia and traveled for 10 months, stopping over in a few countries before arriving and on the way back.

Back home in Italy, while working as an intern, I realized that I wanted to be a seasonal worker and continue with traveling and surfing around the world. Unfortunately, I suffered a Snowboard injury which protracted over time and held me at home for more than two years.

“With a stable job in my hands, I could have decided to settle. But a voice from inside kept calling. It is difficult letting go of something that gives meaning to your life just after discovering it.

I made the decision to leave.

I patented as a Kitesurfing instructor and spent my first summer working in Holland, getting my first job through a friend. At that point, the gates of the world had opened for me again. But while I was preparing to leave for the Caribbean for the next job, I got injured again, this time even more serious.

I went back to office work for another year, working hard on my rehab, kept training by going to the gym almost every day, running and doing indoor swimming. In the meantime, I kept saving money, planning trips and buying travel gear online. I kept the dream alive, in every way I could.

This time I recovered well from the injury, and as soon as I had the chance, I left again. My dreams could wait no longer.

At this point, more than four years had passed since I last saw an ocean. Imagine discovering what you like to do the most in this world. Imagine having discovered it late and because of unfortunate events, you were not able to do it any longer for such a long time.

I had big expectations for my comeback first session, which eventually took place again in the Canary Islands. I expected it to be a magical moment, but rather, it felt very natural, as when you meet an old friend you haven’t seen in a long time.

And then what happened?

For about four years I have been constantly on the move. Passing through home often but never stopping in the same place for more than six months in a row. At the moment, I have visited 32 countries on six continents (if taking into account the microstates), worked six seasons as a Kitesurfing instructor and lived in a dozen different places.

During all this time, I experienced the highlights and downsides of “the life of a traveler”

I’m also a tech fan, and  in the meanwhile, I kept studying and took a Master Degree in Digital Marketing, for which this site is equipped. Today I run my own online Kite Shop, my Digital Agency, and other online projects. If you’re interested into this subject, reach me by e-mail.

What are you trying to tell me?

I will give you suggestions for planning your trips, warn you about the mistakes that I already made, recommend some useful items to take on the road, and reveal how you can start a whole new life every time.

I will cover topics such as love while traveling, Instructors and seasonal workers’ life, travel budget, money management, and safety. I would also be interviewing interesting people I got to meet along my journey and will tell some fun anecdotes that occurred to me while I was traveling.

This Travel Blog is dedicated to all those who are planning their dreams, those who have not yet found the courage to leave but keep wondering about what would happen, and to those who already left.

As I already wrote in the final thanks of my graduate thesis:

“My thought goes out to all those who look at the top of the mountains, the leaves of trees and the surface of the sea always waiting for something. The World is ours.“